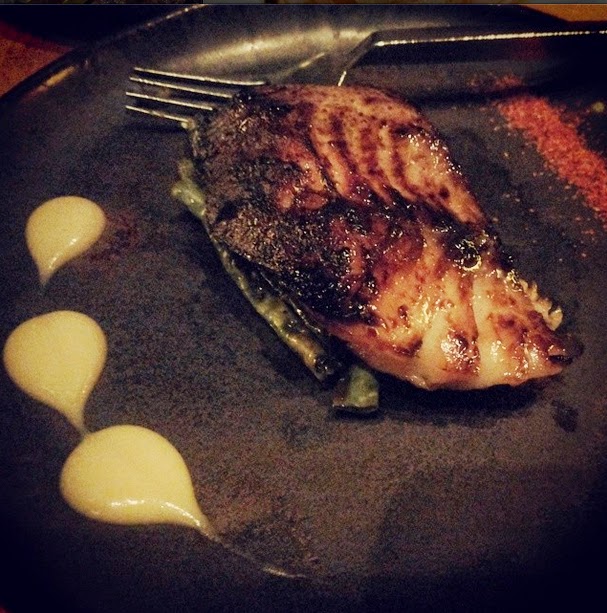 The traditional Chinese name for a herb, ‘San Qi’ suggests sophistication and refinement – this immense space which occupies the ground floor of the Four Seasons Hotel in Worli is assuredly elegant in the way that only the ancestrally wealthy are.

Stride through the doors and one is immediately whooshed into a flurry of activity – teppanyaki chefs whirling food around as diners watch on, enthralled, waiters on a hurriedly endless rotation from table to kitchen; the very environment transformed with an air conditioner cranked to full blast – no matter the weather outside, bring a jacket for inside.

The venue is marketed so as to appear to encompass all cuisines of the Asian continent – I relish the challenge of a restaurant which dares to conquer so many different styles.

The Italian red I sample is impeccably stored and presented – no worry of over-refrigeration here. 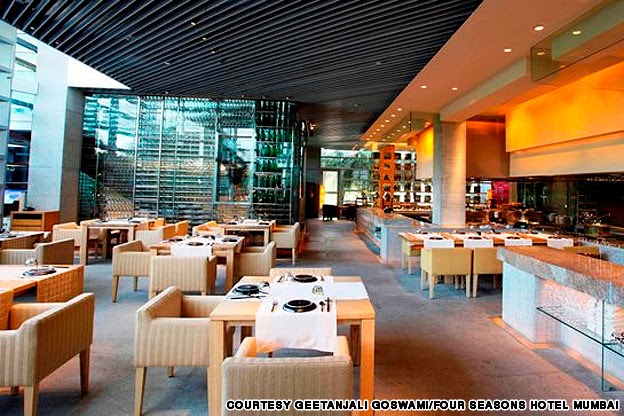 The salmon on rice is listed as an appetiser, yes – however the serving size of two pieces is probably one of the more minuscule I’ve seen, keeping me giggling for a good five minutes.

My date squirms uncomfortably in his seat.

The rice itself is authentically sticky and appropriately neutral in flavour, serving as the perfect sidekick to the squeaky-clean, fresh salmon.

Nothing is out of place with this dish – however in terms of exponential taste, salmon tends to plateau after a while – I prefer flashier, fattier options of fish such as tuna toro. 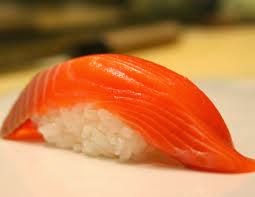 The humble maki roll is usually the last choice I’d choose from a menu overflowing with options, however I restrain myself to ordering a dish which is remotely commercial in order to gauge how it measures up against all the others I’ve sampled.

The California roll knocks me off my feet in terms of taste – the fact that it engages my tastebuds in a manner more artful than the salmon on rice makes me think twice about the power of basics executed exceptionally well.

Sprinkled with tobiko (sesame seeds), San Qi’s interpretation has just enough elements to lubricate the mouth without the need for soy sauce, which generally is a necessity to add oomph to sushi.

Crab normally fails to excite me, yet the combination of this meat with the tantalising avocado leaves me breathless. 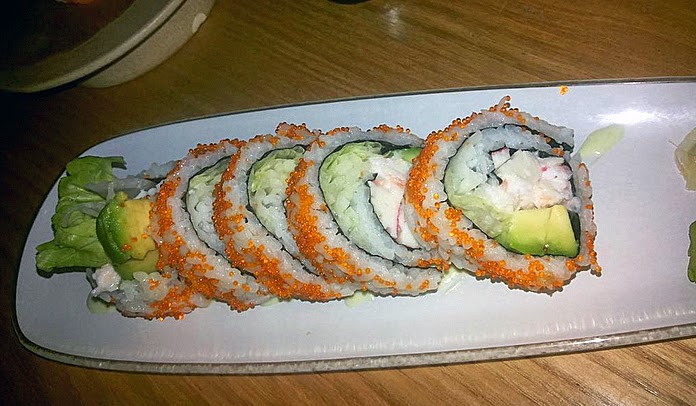 I have never been one to be overly enamoured by dim sum, thanks to the boiling method of preparation which I feel lends an uninspiring tone which relies heavily on on chilli sauce to sex up the flavour.

Made from glutinous rice rendering a feel which is light and fresh, the chicken dumplings are accompanied by mushroom which gives them some variation in dimension. 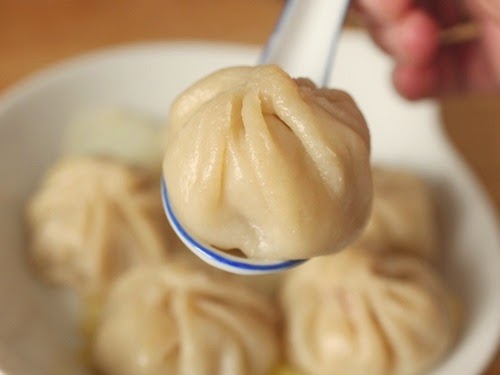 The tandoori seabass chutneywali doesn’t look all that pretty, but who am I to judge a book by its cover?

The danger with using Indian spices with a meat as delicate as fish is that it can all too easily go horribly wrong, with the spices overpowering and rendering the diner in a
chokehold.

The use of coriander masala in this dish is measured to such careful deliberation that it positively serenades the seabass, its Chilean lineage betrayed in the softness of the fish and the way it vanishes in under two seconds after grazing the tongue. 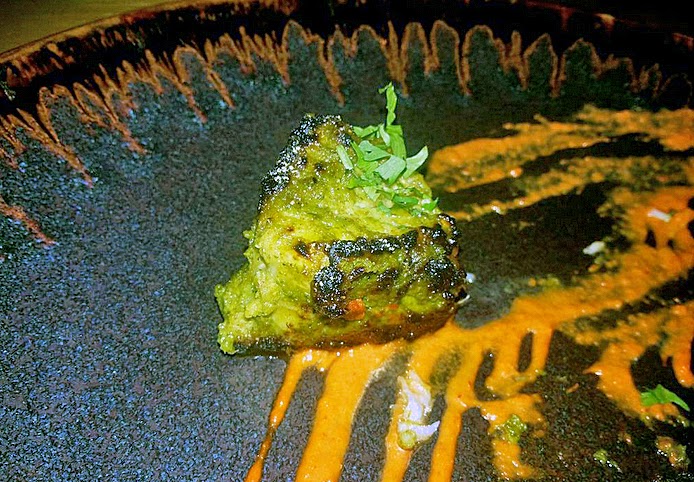 I spy Burrah Kebab on the menu – this little known delicacy is seldom offered in restaurants – and I can’t resist.

While the taste of the masala brims with authenticity, the meat quality is poor, subjecting me to mostly bone which I gnaw dismally on, much to the chagrin of my date.

For the standard of fare and price at San Qi, one would expect lamb of international origin to be used.

What little meat present holds an adequate balance of flavour between the yoghurt and black cardamom used, with fiery peppercorns accentuating the chargrilled flavour of the meat. 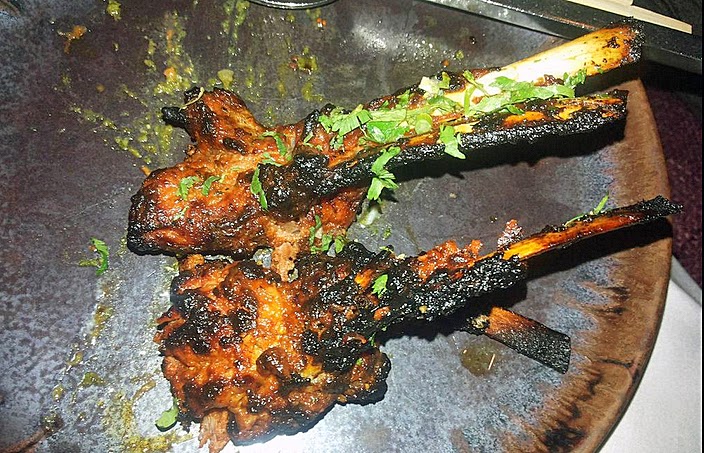 I dip my toe into the teppanyaki offering at San Qi, taking advantage of the wide variety of fish available.

Chatting nonchalantly, I toss a piece of black cod into my mouth and in an instant a blinding flash of flavour renders me comatose.

Wonderfully fatty with a slightly buttery tone, the cod has been laid to rest in a sweet and salty miso marinade for at least two days judging by the intensity of the flavour, before being cooked.

This incredible cod, this unassuming, quiet piece of fish, is the one of the rare highlights of my culinary existence.

Miserably thin, the asparagus as an accompaniment is not the best I’ve had, but in the shadow of its overachieving partner stands up reasonably well.

The USP of San Qi is that it indeeds provides a culinary visa to the most popular Asian countries, using only the most expensive meats and executed in a flawless manner in terms of taste and preparation.

Although the expansiveness of the menu appears to offer many styles of cuisine, San Qi cleverly stick to just four- Japanese, Thai, Chinese and Indian, and excel within the field of those four with a strategic menu and marketing.

The cuisine reeks of classy, intricate preparation, albeit with small serving sizes appropriate for the fashionable uber wealthy, who tend to nibble instead of dine.

With no laurels as such to rest on in terms of an international name, the restaurant works hard to maintain a standard which is, well, pretty much flawless, if you can afford the price of perfection. 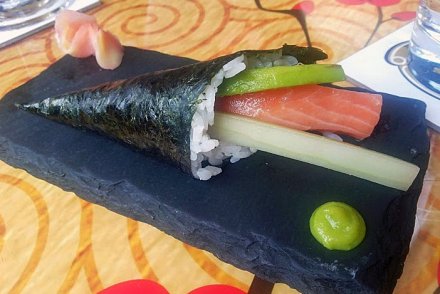 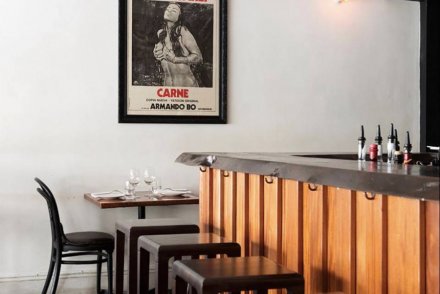 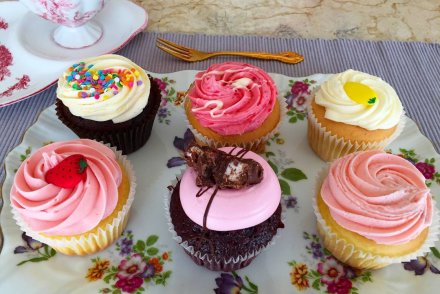