Atlas Dining legitimises the obsessive compulsive need of many – to live everywhere and squeeze everything out of life – with a menu that changes four times a year. Currently we’re in Brazil: chef Charlie Carrington has taken his favourite bits out of his recent trip to the country and churned out his own interpretations.

The surroundings are derelict chic, however it’s obvious that this carefully rustic look would have cost the sun and moon to achieve.

My only regular contact with tapioca has been a bubble tea addiction nurtured from a young age, along with that apple and guava juice-that-wasn’t-really-juice from the 90’s.

I shovel in the first load and all at once, I AM DYING.

Lolling about underneath is coriander and tapoica with pickled papaya. The Pan de queso on top is traditionally a cheese bun, however this interpretation is presented like a lavosh cracker with lashings of fermented cheese and shaved brazil nut. 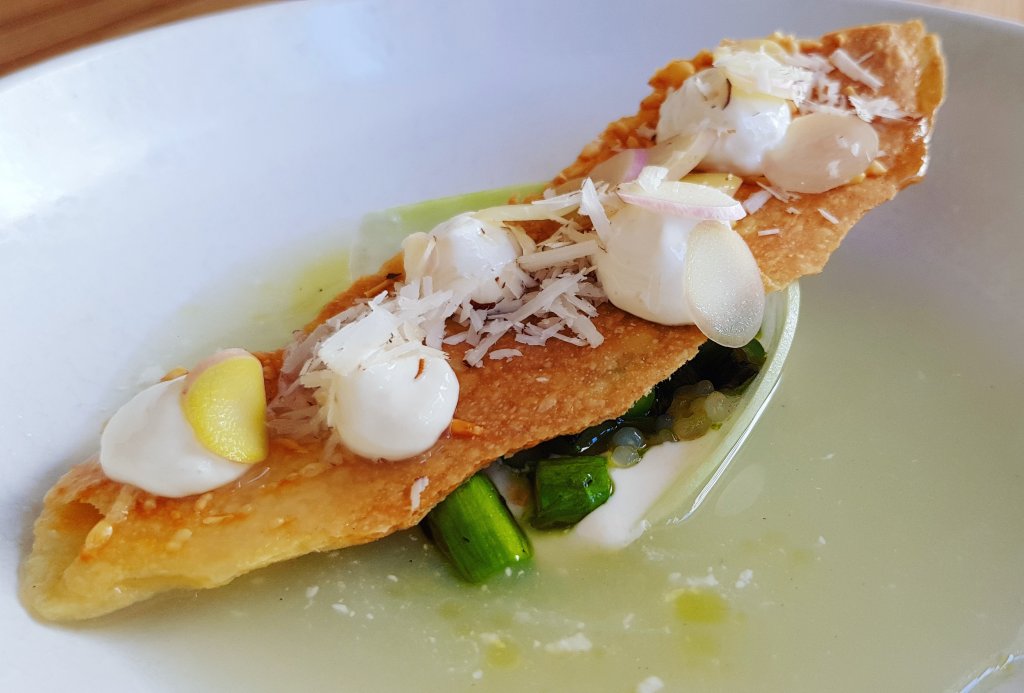 The tinge of char from the asparagus dips in now and then to say hello, while the sour, watery element makes the dish akin to a cheesy version of the Indian delicacy gol gappa.

I eat as slowly as possible to preserve this sacred moment. I have high hopes for the next couple of courses. 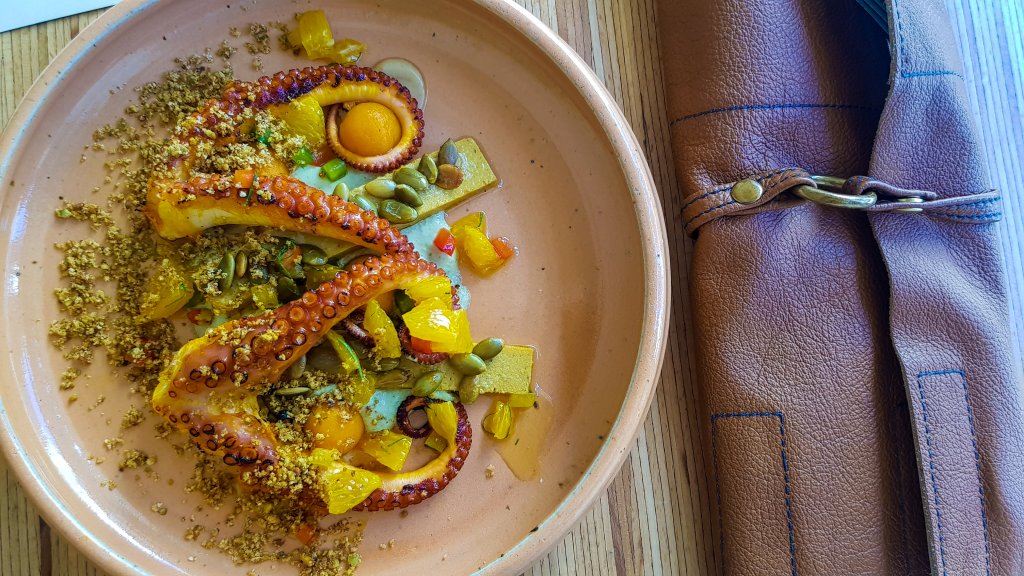 This dish consists of lightly chargrilled octopus with a herb sauce and different renditions of Ode to Pumpkin – the little brown ones are pickled pumpkins, while the long square ones are another variation incorporating a set Brazilian curry paste.

Sprinkled pumpkin seeds contribute further to the frenzy which is shouldered by a salsa of orange, coriander and capsicum with a plantain farofa, a side dish which is typically served with fish in Brazil. 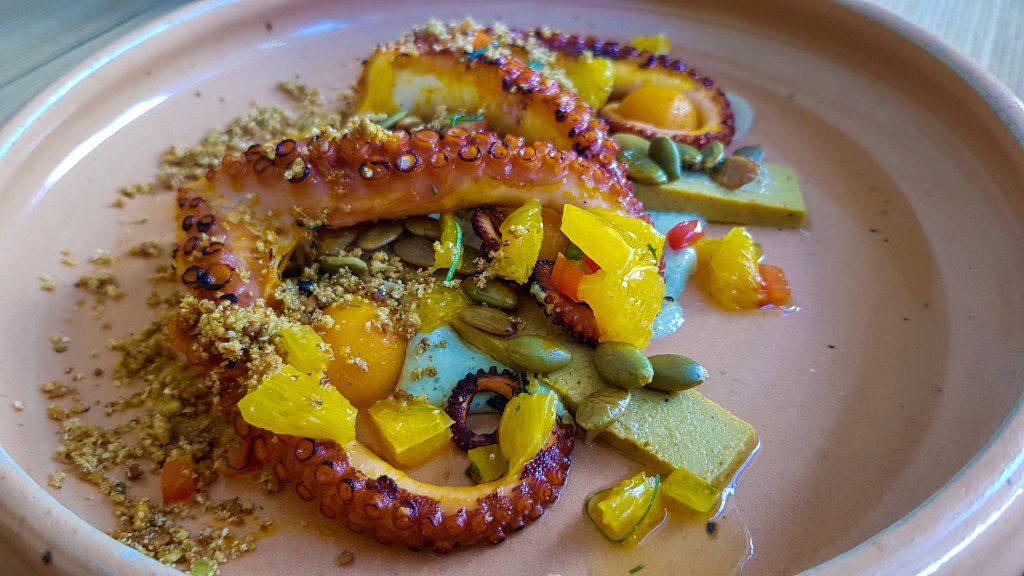 The hearty earthiness of the dish is relieved by the fizz of the orange pieces. The octopus serves as a shy base – normally restaurants let the char do the talking, however in this instance the octopus is happy to play second fiddle to the pumpkin.

It’s not as impactful as the first dish but I like it, a lot. 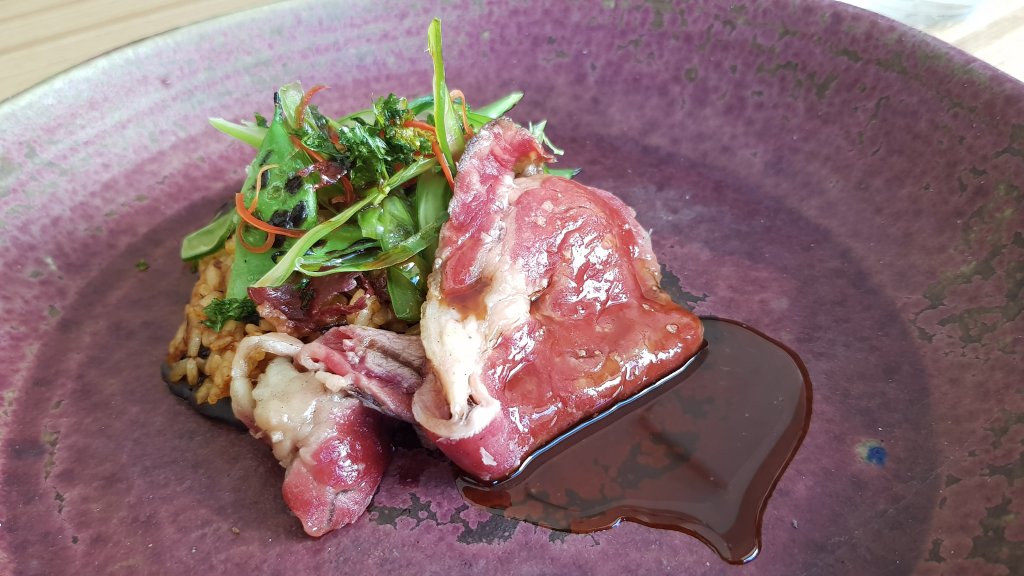 I’m not going to lie – the sound of this next dish does little to rouse my enthusiasm. Atlas Dining, are you sure about this?

However once the plate is lowered, I can smell the bbq – my Achilles Heel – and my heart starts to sing. Who knew rice and beans could be so – sensual? The dish comprises Robin’s Island Tasmanian Wagyu beef, smoky rice, chargrilled green beans with pickled chilli and a smoky capsicum jus. 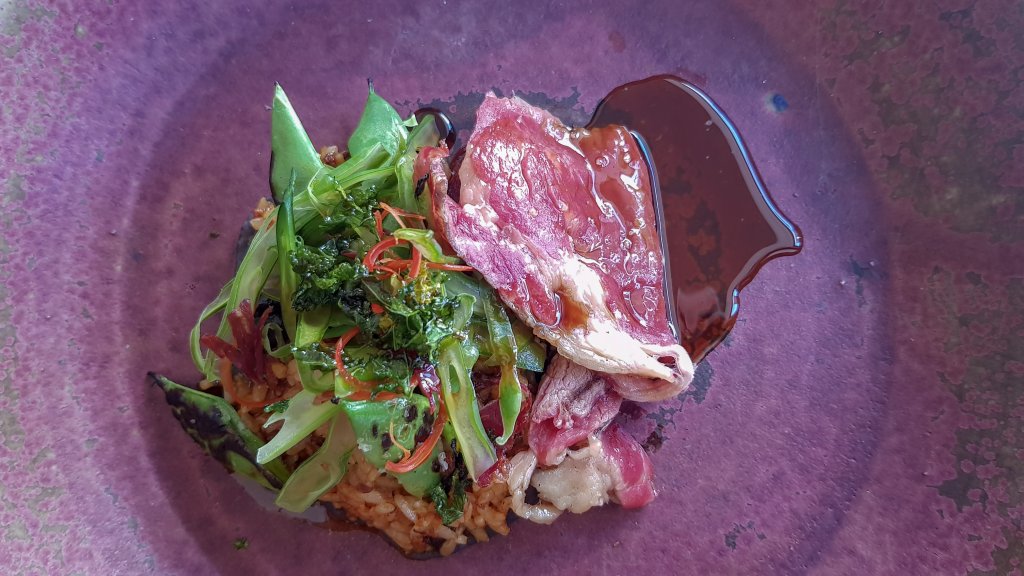 The chorizo holds the sharpest flavour I’ve tasted in a while, coaxed out by the smokey elements in the dish.

The marble score of the wagyu is Australian 6 plus. I’m grateful it’s no higher, as Japanese wagyu of an A4 score and above makes me feel a bit sick after a few bites due to the fat to meat ratio.

This Australian version however, is nothing but velvety sensual slivers of meat so soft, they positively glide down your throat. 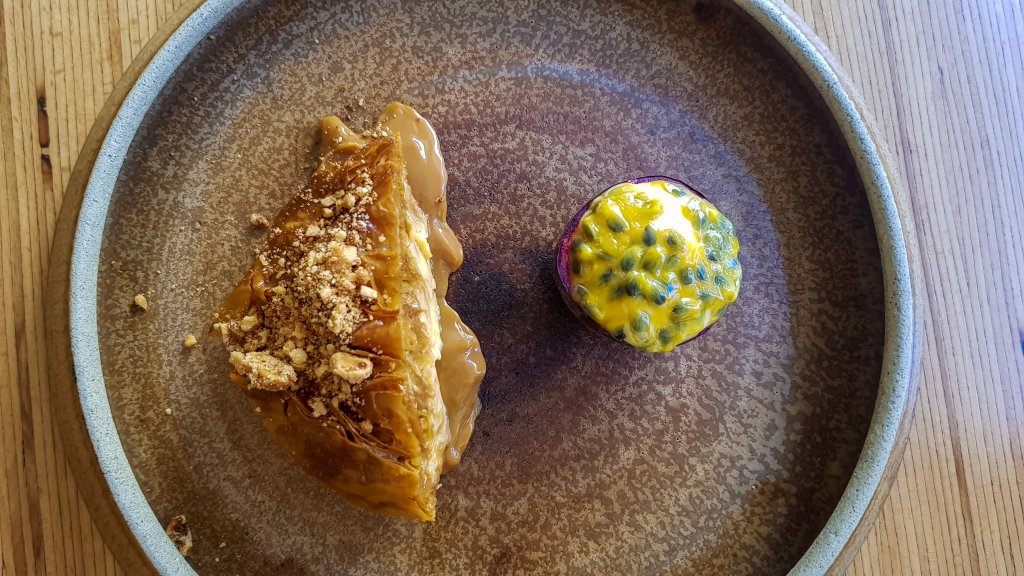 I don’t want to be a Debbie Downer here, but I’m also ambivalent about dessert as passionfruit and custard have for all my life, resided in the No-Go section as commandeered by my moody palate.

The custard cake is a rendition of the Portuguese version with peanuts on top and a dulce de leche underneath. On the side is passionfruit curd and seeds – it has been recommended to pour this mixture on top of the cake mass. 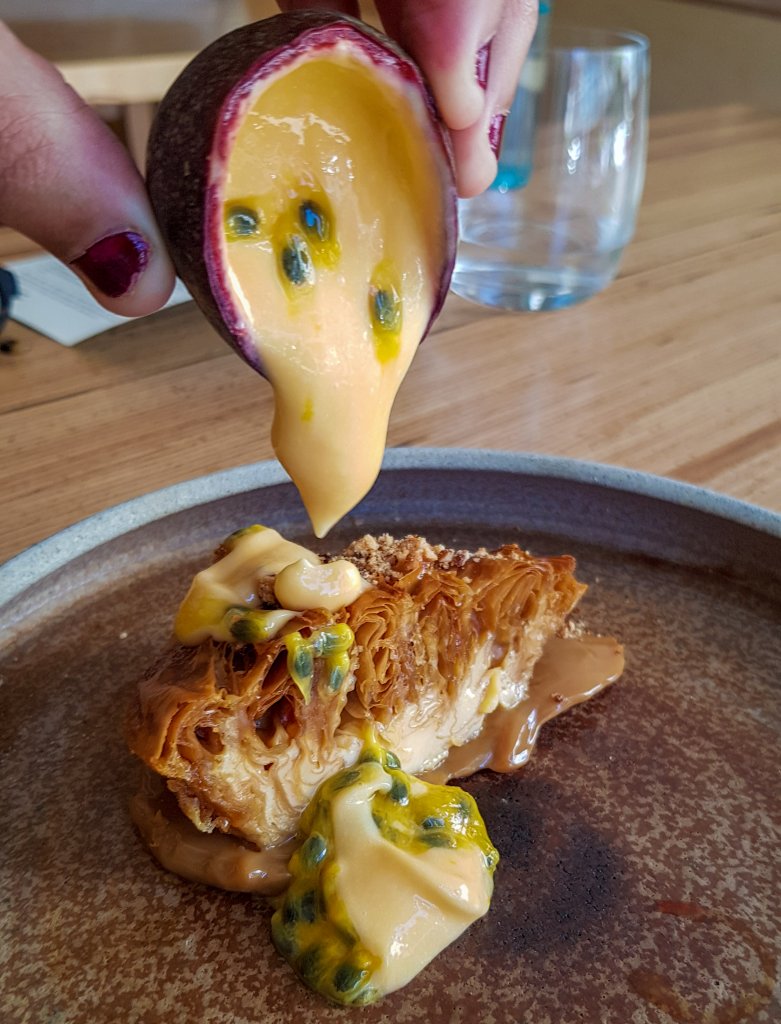 The passionfruit approaches gently – it’s not tyrannically acidic as I initially feared and the reassuring presence of peanut adds a comforting familiarity to the flakey, chewy pastry. 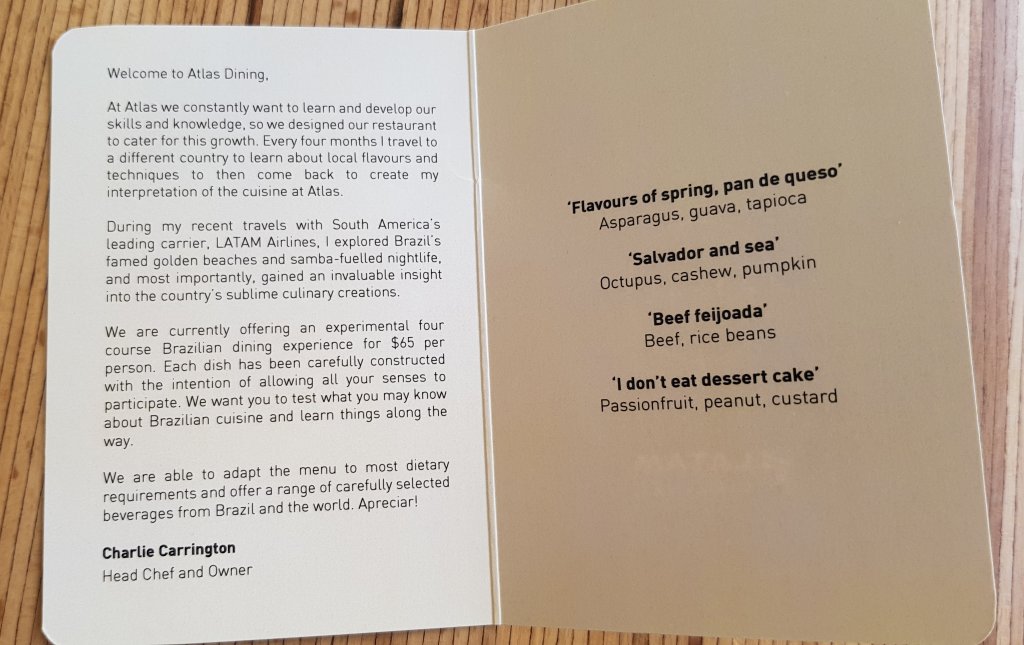 A well-versed gastronome buddy of mine told me that there was something missing in the dishes of earlier courses at Atlas Dining, however all in all, there was nothing I didn’t like on the Brazil menu. Rather, I found myself wishing I had selected the 5 course offering which included the crab, so the pleasure could have stretched on.

The Brazil menu is only on til 8th December, so hustle before you miss it. 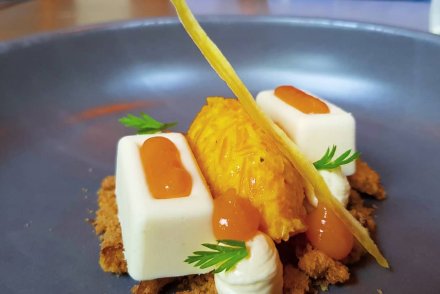 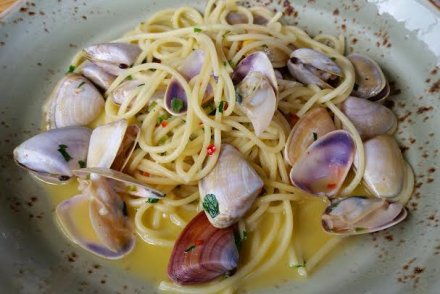